I left the hotel about noon today, had a little lunch and a pedicure.  I then spent a couple of hours at Disney Springs (used to be called Downtown Disney).  When I was here two years ago there was a lot of construction going on there.  Wow….what a change in two years.  It feels very “planned community” now and very upscale.  There are now 90 stores, 57 places to purchase snacks or eat full meals, movie theatres, bowling alley, etc, etc.

I had a little snack – Poutine (French fries with gravy and cheese curds).  I guess it is popular in Canada.  I had read about them and wanted to try them.  They were okay but once was enough. 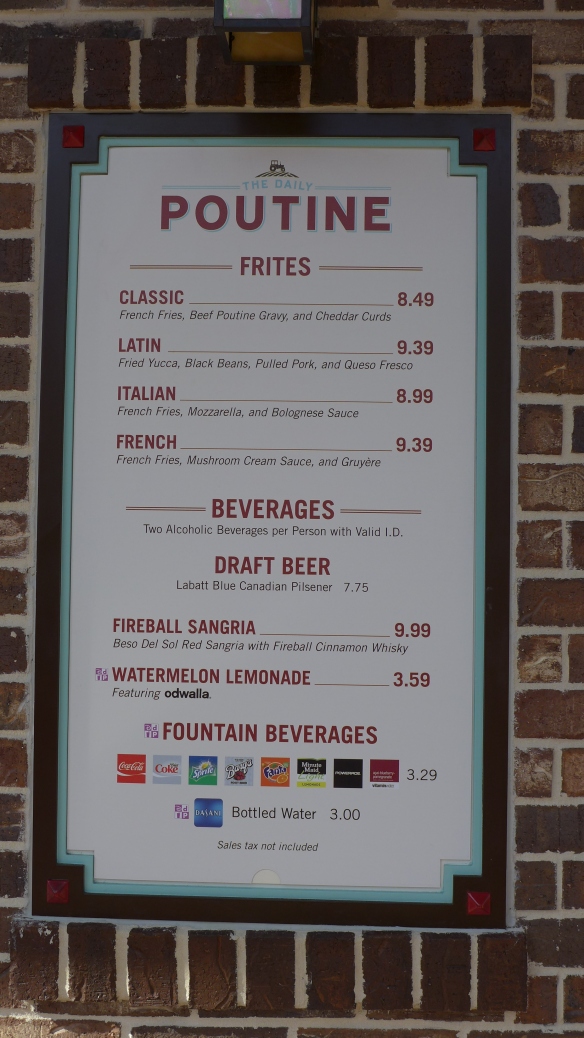 Here are some photos of a few of the millions of souvenir items available for purchase.

The handbag/tote above is a leather Dooney & Burke with disney characters all over it.  Priced at $318.00.

The one below is another leather Dooney priced at $308.00.

I went over to Hollywood Studios and watched the 7:00pm show of Fantasmic. There was quite a breeze to make it a little chilly.   It is 30 minutes long then I followed the crowd to watch

The Night Makes the Jump to Hyperspace

State-of-the-art projection effects, dynamic lighting, lasers and pyrotechnics light up the night like never before! The music, magic and characters of Star Wars combine with special effects and fireworks to put you inside iconic scenes from the Star Wars saga.

You’ll be thrust into the middle of the action as you gaze upon Tatooine’s famous twin suns, fight through an army of Trade Federation battle droids, navigate a swirling asteroid field, rocket down the Death Star’s narrow trench and deliver a heroic final blow to Starkiller Base.

Gather your favorite Jedi, Jawas, Wookiees, droids and Ewoks for an experience you can only get at Walt Disney World Resort. The sounds of John Williams’ majestic Star Wars themes fill the air as the sights of twinkling lights fill the sky.

While a dazzling array of colors burst above you, imagine the awe-inspiring sights of exploding starships during a legendary Star Wars space battle—what better way to celebrate Star Wars than watching a show written on the stars!

It was not my favorite.  You stand in front of a building with a bunch of trees and misc in front.  Then there is a projection show about Star Wars on the building along with lasers, sound and some fireworks.  I guess it was about 10 minutes or so. 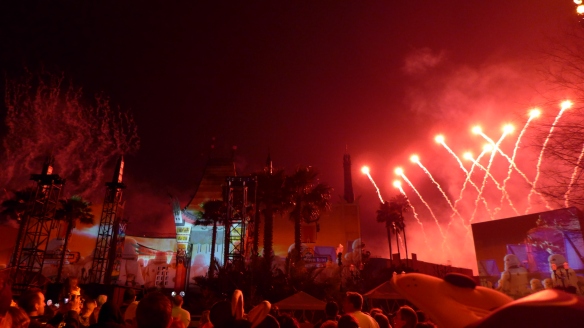