I left Panama City Beach at 9:00am and headed north.  It was a nice day for driving.  I drove 537 miles with a few very short stops for gas and food along the way.

I arrived at Sam’s Town RV Park in Tunica, MS at 8:00pm.  It was a good overnight stop.  It is a very well lit park with a great light on each electric outlet.  This helped with the hooking up after dark.  It was $19.99 for full hook up. 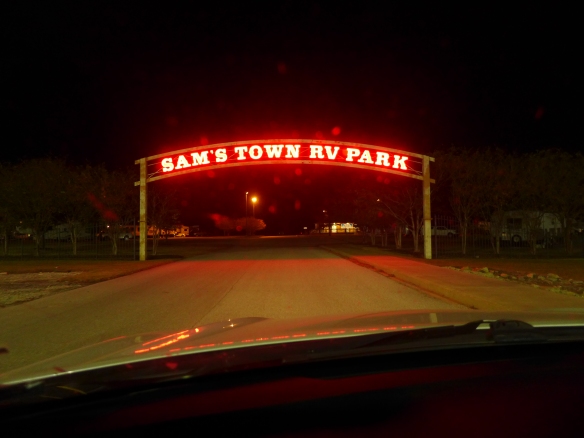 I took this photo out of the trailer window before I left. Some of the front row trailers had already pulled out and I could see one of the many barges that went by.

I left West Memphis, AR about 9:40am and drove thru fog and drizzle for most of the day.

I have stayed at this Rv park before.  It is literally at the edge of the casino parking lot.  I walked across the parking lot to the casino. I had dinner and spent $20 in the casino.  I played for about an hour on my $20 so that was not bad.

It was dark when I left so I took the shuttle back across the parking lot.  I had no neighbors on either side of me and it was nice and quiet all night.

Last night I left my curtains open to enjoy the lights on the bridge and at 10:00pm the lights suddenly started changing.  I quickly ran outside to take some pictures.  It did not last long. 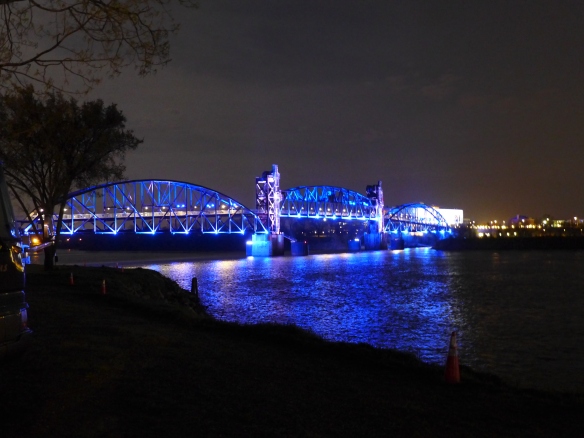 It rained in the night.  I was late leaving this morning and then my neighbors came over and wanted to chat and see the trailer.  I left Little Rock at 10:10am this morning.  Yesterday I drove 332 miles.  Today I drove about 425 miles.  I arrived at Boomtown Casino RV Park in Biloxi, MS at about 8:00pm.  I had to check in at players services inside the casino so I played just a few minutes of slots and left with $10 more than I went in with.

I was amused today at one of my gas stops.  I went inside the convenience store to get a Dr Pepper and on their snack area (hot dogs, nachos, etc) they had two large pots that you normally see at buffets with chili or soup in them.  They had boiled peanuts in theirs.  You know you are in the south when they are selling boiled peanuts.

I also stopped at a Mississippi welcome center to get a map and use the restroom and it was very unique.

Friday morning I felt good enough to slowly pack it up and start for home. The humidity levels had risen significantly and it was 100% humidity at 7:30am.

The highs on Mon – Wed ranged from 79-81 this week. Lovely. It was 83 yesterday but I was in the trailer with the air conditioner on all day.

I decided to drive along the gulf coast and then head home thru Mississippi and Arkansas. I took I-10 west until Mobile, AL and then dropped down to 90 west to drive thru Biloxi, Gulfport and then stopped in Bay St Louis, MS. I stopped at a Panera Bread along the way and ordered the Pick 2 and chose chicken noodle soup and salad. I ate maybe half of it. I only drove 240 miles.

I spent the night at the RV park at the Hollywood Casino Bay St Louis. At the end of their parking area they have a 100 site RV park. It is full hook-ups including cable. They also have 24 hour security and a shuttle bus that runs continuously between the RV park and casino. With taxes the cost was $33.71. Here is my site:

It was a small casino with plenty of smoke. There were three options for dinner. A steakhouse, a buffet and a grill. The steakhouse did not even sound good, the buffet was $24.99 and there was no way I could eat anywhere close to enough food to be worth that. I went to the grill and ordered a cheeseburger. I managed to eat about 2/3 of it.

I took $20.00 and decided to try a few machines. I tried several slot machines but none of them excited me. I finally found the video poker machines on another floor..they hide those as your odds are better on them. So I played for about an hour. I started with $20.00 and left with $27.34. Not bad, a hour of entertainment and I covered my cheeseburger.

I got back on the shuttle bus and went back to my trailer. I mentioned to the driver that the crowd was a pretty senior crowd. I doubt many of the customers were younger than me. He said that I should see it on Wednesdays. It is $6.99 buffet for seniors. He said the valets call it wheelchair Wednesdays as every other car has someone in a wheelchair or with a walker.

Not 5 minutes after I got in the trailer it was storming like crazy. Good timing! It rained for several hours. Just behind my trailer was a good sized creek. You should have heard the frogs in that creek!

I averaged about 17 mpg today.  I drove 384 miles today thru four states.  Missouri, Arkansas, Tennessee and Mississippi.  I am spending the night at the Campground at Barnes Crossing in Tupelo, MS.  It is a nice little park, lots of trees.  The price here is $32 per night.  I arrived here about 6:00pm.

I am watching TV and enjoying the weather.  This is my kind of weather.  Warm but not hot, no bugs, you don’t have to run the air conditioner.