I watched the weather reports for Oklahoma and Missouri last night and again this morning.  It showed significant rain and storms that were moving thru the areas today.  I decided to not start out too early in hopes that it would move thru before I reached each area.

It worked pretty well.  I left WinStar in Thackerville, Ok at 10am this morning.  I made three stops thru the day.  I drove in light showers occasionally.  The worst rain was in the last hour as I drove from Joplin north to home.  Anyway….411 miles and I was home at 6pm safe and sound. 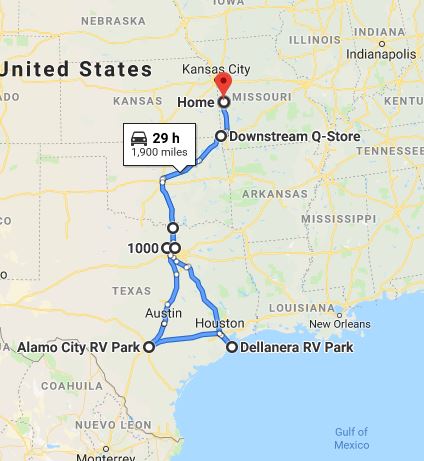 I arrived at Little Home on the Road at 11:00 for my appointment today.  This is a small shop where two guys (Terry & Josh) perform modifications, upgrades, routine maintenance and repairs on Casita travel trailers.  Casita is a very similar fiberglass trailer to my EggCamper.  They also have a company that designs and makes many of the items.  They were super nice, excited by new challenges.

Neither of them had ever seen an EggCamper before.  That is why I had to stop two weeks ago for them to take a look and see if they could do what I wanted done.

My main request was to have shocks put on the EggCamper.  They designed the shock kit as none of the fiberglass trailers have shocks.  The shocks cut down on the bounce in the trailer which causes your stuff to bounce around inside the trailer.

Due to slight difference in the frame, they had to install a lift kit first.  This is something many people to do to their Casitas.  It raises your trailer up 3 inches which gives you more clearance.  They also installed a hand grip on the outside by the door, shortened the safety chains that were crazy long, installed a new hitch rise to allow for the trailer being 3 inches taller and helped me find the burnt fuse that was causing my 12 volt to not charge while driving.  They also found issues with my brake plates and wheel bearings so fixed those as well.

So I left the trailer there at 11:00 and went to the Fort Worth botanical gardens and did some shopping while they worked.  They were also doing some work on another trailer. 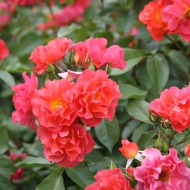 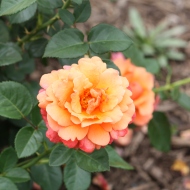 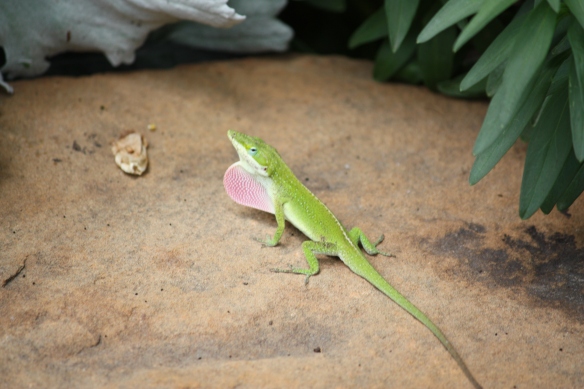 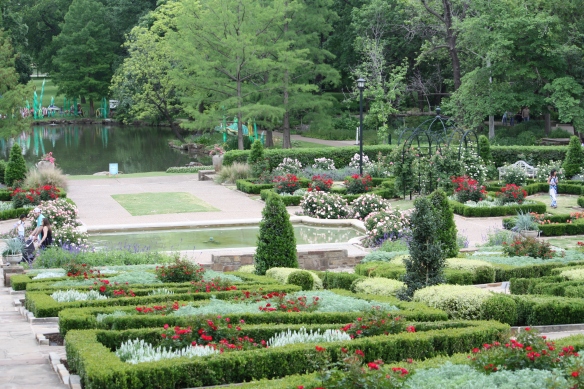 I went back at 5:30 and they said I could take the trailer and stay another night and finish tomorrow or they would continue on till they were done this evening.

I really wanted to move on and they were fine with that.  So they finished and I left there at 7:30pm.  I drove 68 miles to Thackerville, OK to stay overnight at WinStar Casino.  I arrived at 9:00pm.  It is 435 miles home from here.

I pulled out of the campground in San Antonio at 11:00am this morning.  Lovely, sunny day.  Drove 298 miles with a few stops along the way.  Boy was traffic heavy on I-35.

I have an appointment in the morning in Haslet, TX.  The closest decent RV Park or campground I could find is Twin Coves Park & Campground in Flower Mound, TX.  Google maps show that it should be a 35 minute drive to the trailer shop.

Located on 243-acres on the north shore of Lake Grapevine, the park boasts 19 furnished cabins and 22 RV slips, in addition to a variety of other amenities including a small craft launch boat ramp, and much more.

The park is right in the middle of very nice, gated residential area.  It would be a nice place to spend a few days.  On the water, huge concrete site, full hook-ups.  $45 for the night.  It is very nice here.  I am enjoying the evening with the door open and it is very quiet.

Here are a few photos after I arrived at 7:40pm: 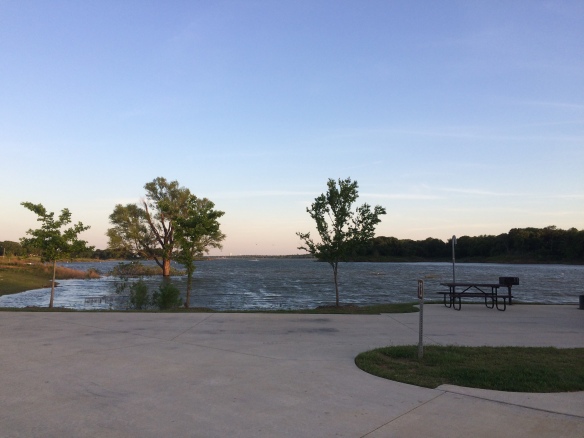 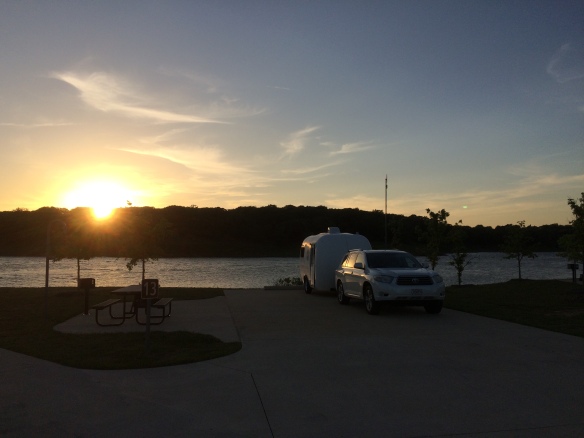 So I had no idea when I headed for the “historic Market Square” how bad an idea that was for this afternoon.

(Shops, restaurants and vibrant surroundings. All at Market Square. A three-block outdoor plaza lined with shops, and restaurants in downtown San Antonio, Market Square is the largest Mexican market in the United States. The “El Mercado” and the “Farmer’s Market Plaza” boast more than 100 locally owned shops and stalls. Enjoy the sights and flavors of old Mexico and find authentic Talavera pottery, exotic curios and handcrafted works of art. Stay for the gourmet Mexican cuisine at Mi Tierra and La Margarita, or kick back at the Farmers Market Food Court and enjoy the show on the stage.)

I knew that tonight was the big illuminated parade – Fiesta Flambeau.  Two parades in one week was enough for me so I was not attending.  However when I reached the market square area at noon or so the streets were already lined with pop up tents, chairs and all kinds of stuff saving their place for the 7:00pm parade.   These people take their parade watching seriously.  Anyway that meant that parking was a mess.  I finally found someplace and paid to park.  I walked a couple of blocks to the market square.  Well thousands of my new friends were also at the market.  It was crowded!  I wandered in and out for a short while but I did not last long.  Here is a couple of photos of the worst of it: 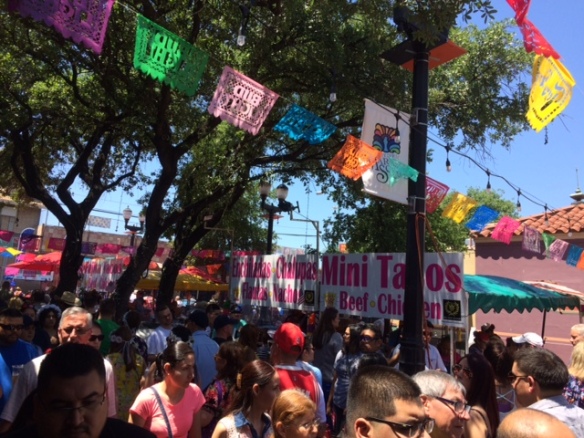 So I found my car and headed north away from the madness.  Unfortunately when I headed back thru town to the campground traffic was backed up on the highway as people at 6:00pm were trying to get to the downtown area I assume to watch the parade.

I finally reached the trailer and was surprised to see that a Casita trailer had pulled in next to my Eggcamper.  They are another egg shaped trailer.

Hitching up and heading north tomorrow.

The weather was perfect today.  I attended the Battle of Flowers Parade today.

The city of San Antonio owes its annual Fiesta to a small group of passionate, dedicated women who started it all with the first Battle of Flowers® Parade in 1891. What began as a patriotic celebration to honor the heroes of the Alamo, Goliad and the Battle of San Jacinto has since evolved into one of the oldest and largest parades in the country. Today, The Battle of the Flowers®Association – the only all-women, all-volunteer organization producing events of its kind – continues to present the Battle of Flowers® Parade as an integral part of the citywide celebration.

The Battle of Flowers® Association is a civic non-profit organization, whose objective is to teach the history of our state and keep the patriotic traditions of Texas and San Antonio alive.

The people in the parade walk, march, ride from 9:30am to 1:00pm.  It is the second largest day parade in the U.S.  There are several bands, floats, a few balloons and a lot of “royalty”.  As a part of the Fiesta they crown a queen, a princess and 24 duchesses several months before the parade.  They then reign over the more than 100 events that occur during the 10 day festival.  Each of the “royalty” wear custom designed dresses with elaborate detached jeweled trains.  Supposedly the cost for the dresses is between $30,000 and $60,000.  The cost is paid by the young lady or her family.  Obviously, most of the “royalty” come from affluent families.

So it is a thing here during the parade for people to yell at the royalty young ladies as they go past to “show me your shoes”.  So you see all the various creative shoes/boots they have.

You will see women wearing flower headpieces.  They call them “halos” and everyone wears them.  You can buy them for $5 or so on every street corner.  Another thing that is popular is cascarones (confetti eggs).  They are eggshells filled with confetti and they break them over the head and then you have confetti all over your head.  Of course, there are the hundreds of different kinds of medals for people to collect each year.

I had purchased my seat ticket before I came and it was not much easier to find then the river parade seating.  They at least did have someone that worked the bleacher areas to help.  Fortunately my seat was in the shade until the last 20 minutes or so of the parade. 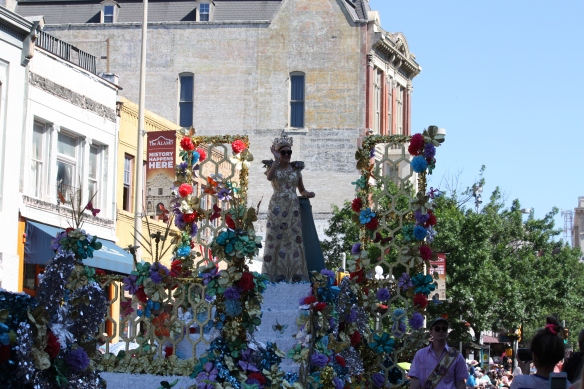 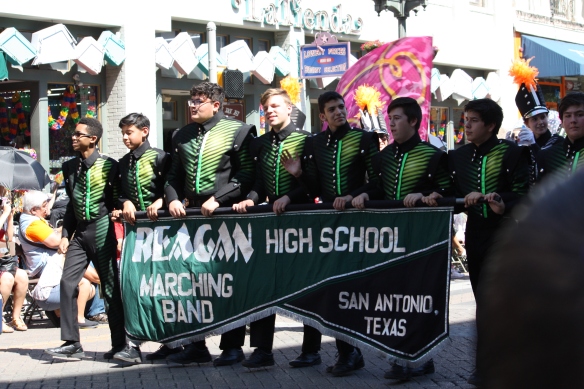 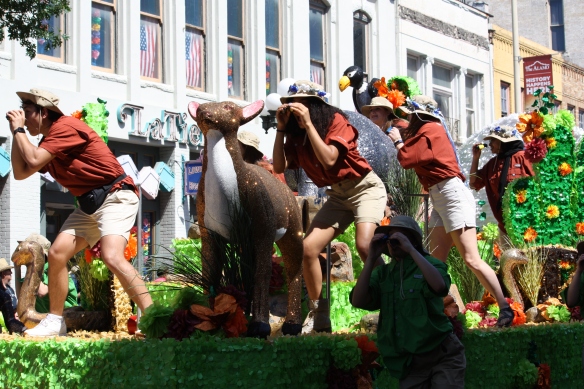 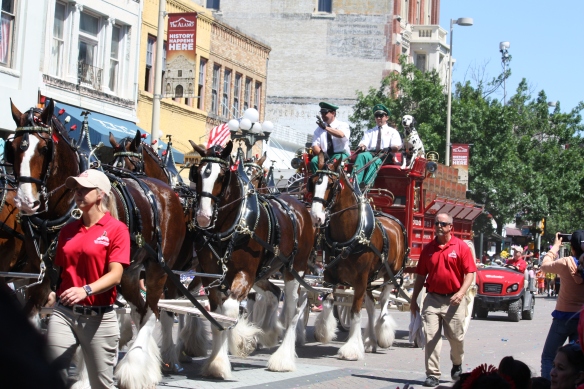 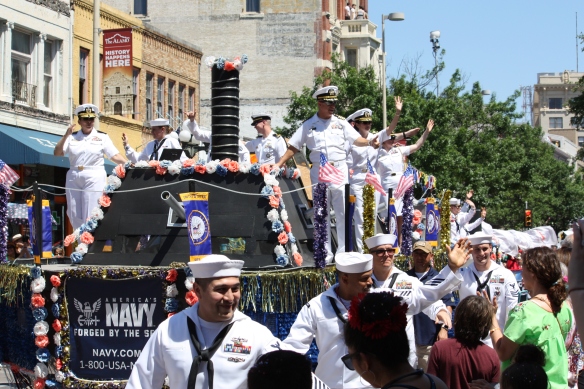 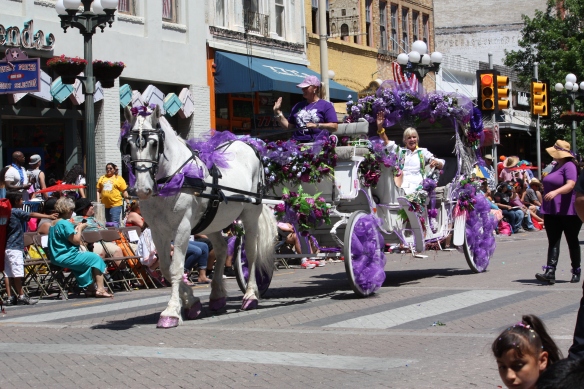 After the parade ended, I had a little lunch and then drove to Mission San Jose.  There are five missions here to visit.  The Alamo (Mission San Antonio De Valero) is the one everyone knows.  Mission San Jose is the largest.  The best part was the church. 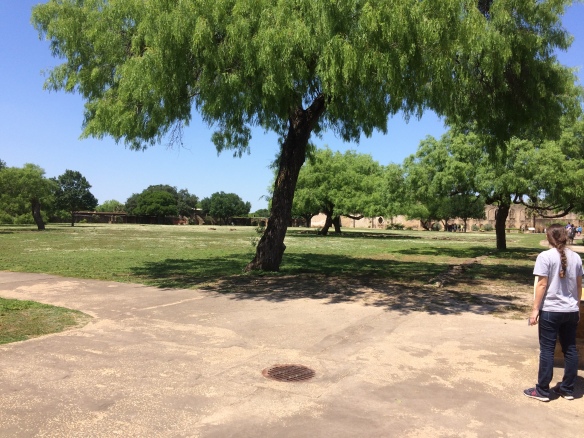 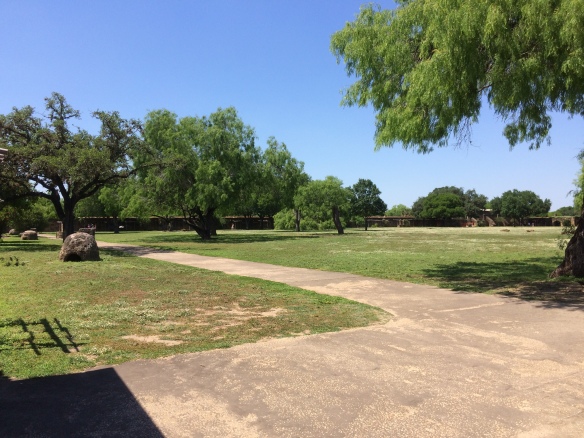 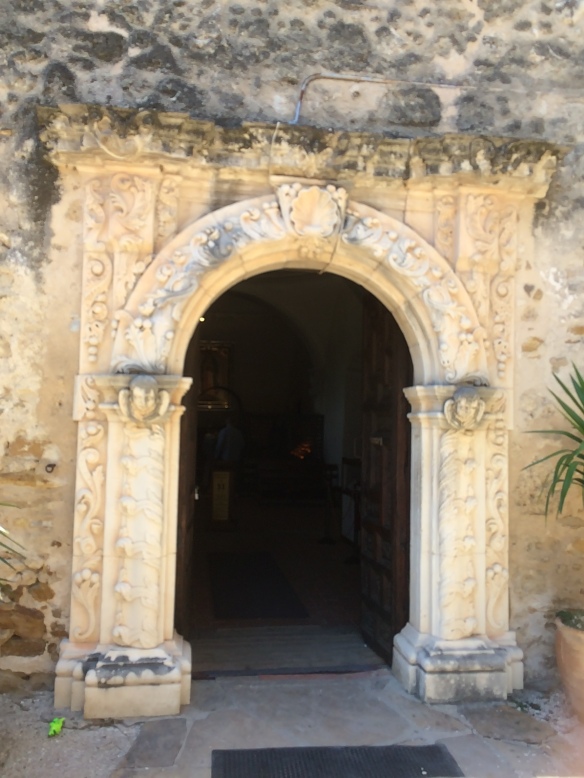 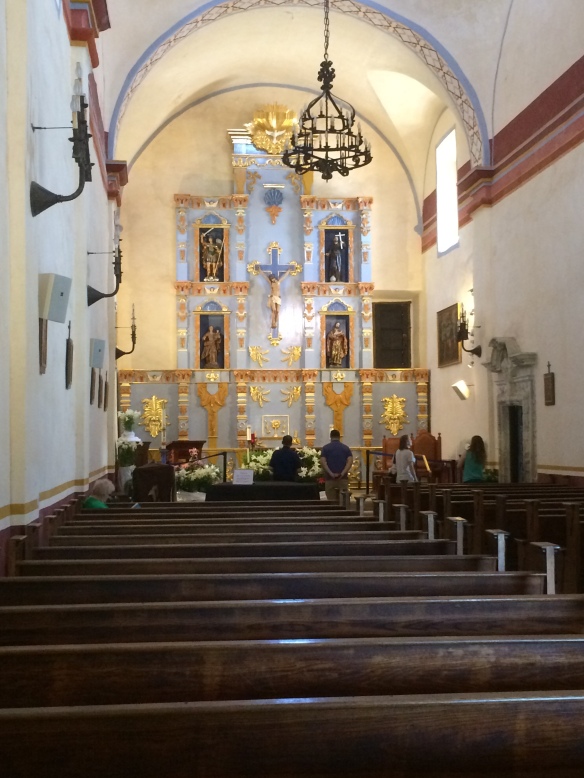